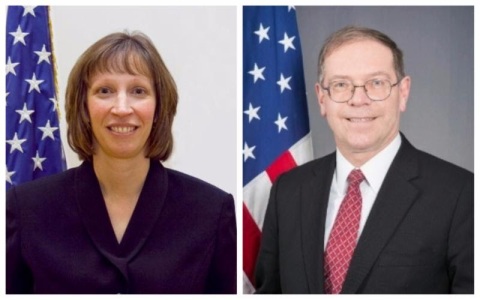 WASHINGTON, D.C. – In the final days of the 115th Congress, last week, the U.S. Senate confirmed by a voice vote Ambassadorial nominees Lynne M. Tracy and Earle D. Litzenberger to represent the United States in Armenia and Azerbaijan, respectively.

Last month, during the Senate Foreign Relations Committee (SFRC) business meeting on the nominations, Ranking Member Robert Menendez (D-NJ) explained his support for both candidates, as well as the importance of strong U.S.-Armenia relations.

“Armenia and the Caucasus region will continue to be vital to regional and global security. According to the OSCE, Armenia’s elections over the weekend met international standards. I look forward to supporting the government’s efforts to build strong democratic institutions, a vibrant Armenian economy, and oppose any efforts to violate Armenia’s sovereignty,” Ranking Member Menendez said.

During Ambassador-designate Tracy’s nomination hearing she promised to support Armenia’s “remarkable” democratic reforms. As to questions at the hearing by SFRC Ranking Member Menendez and Senator Ed Markey (D-MA) on the Armenian Genocide, she agreed that “1.5 million Armenians were deported, massacred, or marched to their death in the final years of the Ottoman Empire” in 1915, but fell short of properly categorizing the killings as genocide.

“Throughout my time in the Senate, I have advocated for an honest accounting of the Armenian genocide. I believe we have a moral imperative to recognize the atrocities that were committed against the Armenian people. Ms. Tracy’s experience in Russia and Central Asia positions her to help navigate U.S. policy in this critical time. I support this nomination, but expect to work closely with Ms. Tracy on how she will encourage an honest acknowledgement of the Armenian Genocide, support Armenia’s ongoing efforts to ensure accountable, citizen-responsive governance, and support efforts to reach a peaceful settlement of the Nagorno-Karabakh conflict,” he added.

During the SFRC business meeting, Senator Menendez also noted the importance of safety in Artsakh (Nagorno Karabakh), and his expectations for the U.S. Ambassador selected to be the representative in Azerbaijan.

“I support Mr. Litzenberger’s nomination and expect to have close and continuing dialogue with him on how he will urge the Azeris to step back from any threatening behavior that could disrupt the line of contact in Nagorno Karabakh, support respect for human rights, and support efforts to reach a peaceful settlement of the Nagorno Karabakh conflict,” Senator Menendez said.

The hearing for Ambassador-designate Litzenberger occurred in October, wherein he restated the U.S. position condemning violence along the line of contact, which undermines the peace process and violates the 1994 cease-fire agreement.

Lynne M. Tracy of Ohio is a Career Member of the Senior Foreign Service, Class of Minister-Counselor, currently serving as Senior Advisor for Russia Affairs at the U.S. Department of State. Previously, she served as Deputy Chief of Mission at the U.S. Embassy in Moscow, Russia; Deputy Assistant Secretary for Central Asia in the Bureau of South and Central Asian Affairs at the Department of State; Deputy Chief of Mission at the U.S. Embassy in Ashgabat, Turkmenistan; and Principal Officer at the U.S. Embassy Branch Office in Astana, Kazakhstan. Additionally, Ms. Tracy served as the Principal Officer at the U.S. Consulate in Peshawar, Pakistan, where she was awarded the Secretary’s Award for Heroism. She is the recipient of the State Department’s Distinguished Honor Award. Ms. Tracy earned her B.A. from the University of Georgia and J.D. from the University of Akron.

Earle (Lee) Litzenberger is a career member of the Senior Foreign Service with the rank of Minister Counselor. He has served as the Senior Advisor in the Bureau of Political-Military Affairs (PM) since January 2018. Mr. Litzenberger has served as Deputy Chief of Mission to the U.S. Mission to NATO, Brussels (2014-2017), the U.S. Embassy in Belgrade, Serbia (2010-2013) and the U.S. Embassy in Bishkek, Kyrgyzstan (2006-2009). He was the NATO Deputy Senior Civilian Representative in Kabul, Afghanistan (2013-2014). His other overseas assignments include the U.S. Mission to the European Union, Brussels, and the U.S. Embassies in Kazakhstan, Bulgaria and Algeria, and the U.S. Consulate General in Marseille, France. Mr. Litzenberger has also served at the Department of State in Washington, in the Office of the Deputy Secretary, the Bureau of Near Eastern Affairs, and the Bureau of Political-Military Affairs. He holds a B.A. in History from Middlebury College and an M.S. in Strategic Studies from the U.S. Army War College. Mr. Litzenberger speaks French, Russian, Bulgarian and Serbo-Croatian. 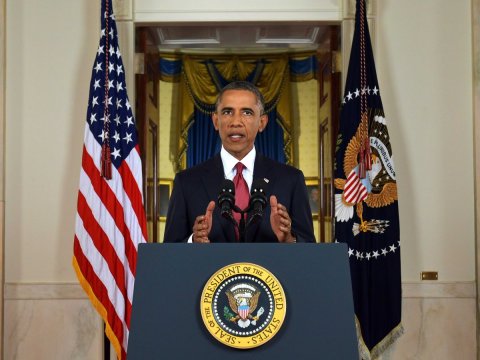 Senate Confirms Next U.S. Ambassador to Turkey; Vote on Nominees to Yerevan, Baku Expected in December

This week, the House and Senate considered measures concerning the Armenian American community. Congress was expected to pass a Continuing Resolution (CR) to avoid a government shutdown on September 30th, when current funding is set to expire. However, after President Obama’s primetime address on September 10th calling for the arming of Syrian rebels, the House voted on a measure to do just that and attached it as an amendment to the CR, setting up a complex and very interesting pattern of voting.

[Also on FLArmenians.com: From Crimea to Kessab: Did the West Approve the Attack on Kessab]

According to several interviews with Armenian American community leaders across the United States, an overwhelming majority support US airstrikes against ISIL. However, they do not support President Obama’s call to train and arm Syrian rebel factions, especially in the wake of the Turkish-backed rebel assault on the Christian Armenian town of Kessab, Syria earlier this year.

Everyone else stood with President Obama in supporting the amendment to arm Syrian rebels and for the CR.

While it is clear that Armenian Americans support the President’s vow to “destroy and ultimately defeat ISIL,” they are wary of training and arming Islamic rebel factions with known ties to al-Qaeda and that have a record of attacking Christians just like ISIL.

Florida Armenians have an important role to play in this debate. Many Armenian American families in Florida emigrated from Syria, mostly descendants of the 1915 Armenian Genocide. Some still have relatives there. They are uniquely familiar with the regional dynamics and can provide critical insight into what groups truly protect and respect religious minorities, be they Christian Armenian, Assyrian, or Yezidi.

On Wednesday, the Senate voted 98-0 to confirm John R. Bass as the next U.S. ambassador to Turkey. Senate Foreign Relations Committee Chairman Robert Menendez (D-NJ), and Senators Barbara Boxer (D-CA), Mark Kirk (R-FL), and Ed Markey (D-MA) submitted to the nominee questions on the Armenian Genocide and Turkey’s blockade of Armenia. “We commend Chairman Menendez, and Senators Barbara Boxer, Mark Kirk and Ed Markey for their stance on issues concerning Turkey’s denial of the Armenian Genocide, the Turkish-Azerbaijani blockade of Armenia, and other critical issues affecting the region,” stated Armenian Assembly of America Executive Director Bryan Ardouny. “Following in the footsteps of Henry Morgenthau, the U.S. ambassador to the Ottoman Empire who in 1915 alerted the world to the Armenian Genocide, it is important that our Foreign Service officers execute a foreign policy that appropriately reflects America’s values,” he said.

Also on Wednesday, the Senate Foreign Relations Committee heard testimony from President Obama’s nominees to be the next U.S. ambassador to Armenia and Azerbaijan, Richard M. Mills and Robert F. Cekuta, respectively. Both are expected to be confirmed by the full Senate sometime during the lame-duck session, which is scheduled to begin on Wednesday, November 12th.

Diocese of Armenian Church of America Participates in Florida Activities

Last weekend, parishioners of the Jacksonville mission parish gathered for the provisional opening of the church’s new hall. On Sunday, February 17, the Rev. Fr. Tateos Abdalian, the Diocese’s Director of Mission Parishes, celebrated the Divine Liturgy and performed a Home Blessing service in the new facility. 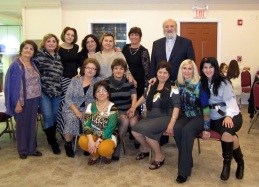 The hall is located on the first floor of a two-story building that the parish purchased in the summer of 2011. Since then, parishioners have worked together to renovate the building, which will serve as a community center, where local Armenians can gather for worship, and for cultural and social programs. The second floor, which will be completed soon, will be used for liturgical celebrations and performing sacraments. The formal blessing ceremony will be presided over by Diocesan Primate Archbishop Khajag Barsamian later this year.

Parish Council chair Elmira Grigoryan expressed her appreciation to the community for its dedication to the project. Special thanks went to Suren Vardanian and Harout Baboyan, who have been overseeing the renovations.

Also during his visit, Fr. Abdalian performed a requiem service to honor the Armenian victims of Azerbaijan’s ethnic cleansing. Many of the families in Jacksonville moved to the U.S. after fleeing anti-Armenian pogroms in Sumgait and Baku. 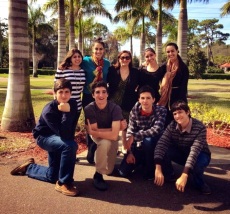 Earlier in February, Jennifer Morris, the Diocese’s Youth Outreach Coordinator, traveled to the Sunshine State where she led the Western Florida ACYOA Juniors Retreat.  More than 20 teens from St. Hagop Church of Pinellas Park, and Soorp Haroutiun Church of Orlando, gathered for small group discussions and Bible study sessions that encouraged them to think about how they can better share the light of Christ in their everyday lives.

On Sunday morning, the Rev. Fr. Hovnan Demerjian, pastor of St. Hagop Church, celebrated the Divine Liturgy and welcomed Jennifer Morris to speak to the parish about the Diocesan Summer Camp programs. The retreat was hosted by St. Hagop Church, with the leadership of youth adviser Yn. Anna Demerjian and the support of several parish volunteers.