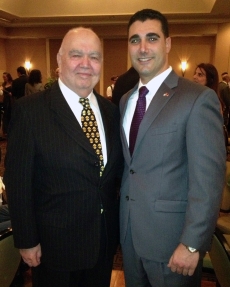 Dr. Hovannisian, a professor of Armenian and Near Eastern Studies at the University of California Los Angeles (UCLA), is a pioneer of Armenian studies in the United States. He has authored many books and edited and contributed to at least a dozen other works. In 1987, he was appointed the first holder of the Armenian Educational Foundation Endowed Chair in Modern Armenian History at UCLA.

“I’m deeply honored and thankful to the ANCA for considering me worthy of receiving this award. Vahan Cardashian remains a champion and a symbol for the Armenian people. I feel very satisfied after my long career, and I feel rewarded that I’ve had more than a half century of wonderful experiences in the classroom teaching generations regarding Armenian history and identity,” Hovannisian said.

“Speaking in the British parliament is a place to give voice to the voiceless, to speak for those who can’t speak for themselves. … I would like to say thank you to the Armenian people, who in that holy land of Artsakh have formed that front line of faith and freedom for the rest of the world. We who live in freedom, we who call ourselves Christian, owe you a debt of gratitude for holding that front line for us. With all my heart, I thank you,” the Baroness said.

Baroness Cox has visited Armenia and Nagorno-Karabakh 78 times to date, many of them during the war with Azerbaijan in the early 1990s, and is planning on at least two more visits in 2013. Working with the Humanitarian Aid Relief Trust (HART), she helped establish the Lady Cox Rehabilitation Centre in Stepanakert in 1998, which has become a leader in providing care and rehabilitation for those with physical or mental disabilities.