On Wednesday, April 24th, St. Hagop Armenian Church of Pinellas Park, FL hosted a commemoration of the 104th anniversary of the Armenian Genocide. 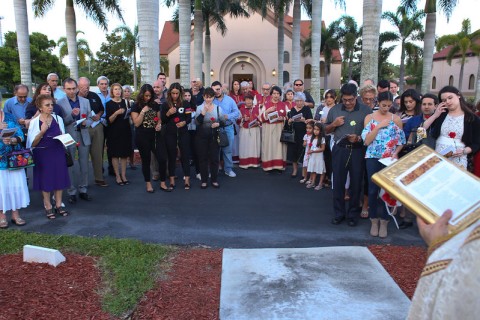 An Armenian Genocide Exhibit from the Florida Holocaust Museum was also on display with the assistance of George Kamajian. Michael Shahnasarian and his wife Jean, who chairs the events committee, provided the fellowship. Photography provided generously by Teresa Haidarian and video by Art Ekizian. 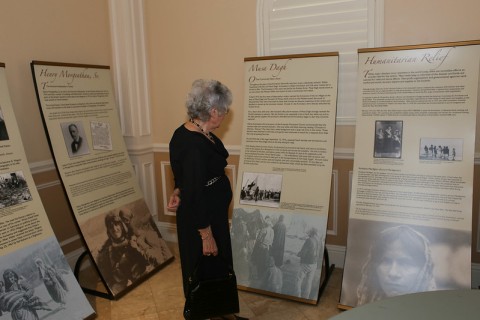 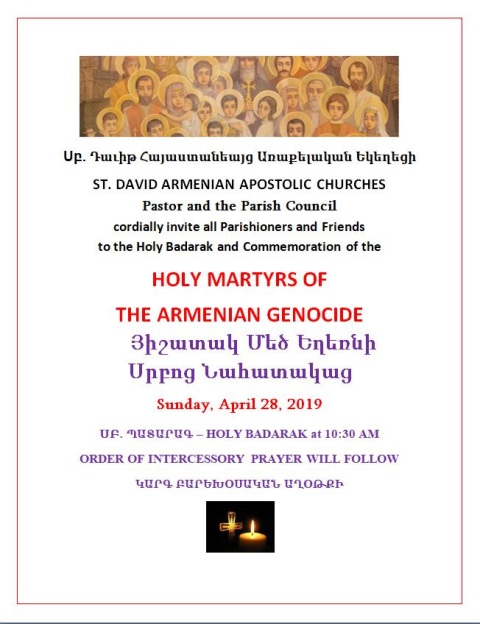 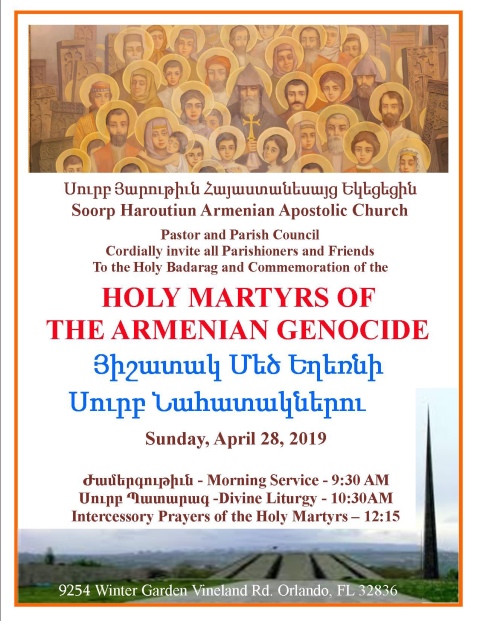 BOCA RATON, FL – On Tuesday, April 16, a group of local and national human rights activists, community leaders, elected officials, religious leaders, teachers and students gather in Sanborn Square for “Together We Remember: The Future of Our Past,” reported Florida Armenians.

David Estrin, Founder and CEO of Together We Remember, organized the second annual universal commemoration program in Boca Raton. “April is Genocide Awareness Month,” Estrin said. “So it’s important that we all come together this time of year to commemorate our past and take action for the future,” he said.

The program began with the reading of names of victims of various genocides, including the Armenian Genocide, as well as victims of hatred, bigotry, discrimination and gun violence in the world. Arsine Kaloustian, Chairwoman of the South Florida Armenian Genocide Commemoration, Inc. (AGC) read the names of genocide victims. Lonny Wilk, Senior Associate Regional Director, Anti-Defamation League-Florida read the names of victims of hatred, bigotry, discrimination and gun violence. A local student from the Boca Raton Interfaith Youth Association read the names of lynching victims in Florida.

Congressman Ted Deutch (D-FL), whose district includes the cities of Boca Raton and Parkland, gave the keynote address. His remarks focused on the meaning of “Never Again” today and how individuals learn from one another and take collective action.

To conclude the program, participants were encourage to take action in their own way. Some took action by writing to their elected officials from their smart phones. Others shared stories and pictures on social media to amplify the message. Some pledged to write letters to their local newspapers.

At the end, everyone listened to the stories of each other, engaged with people they had never met, and people came together to say in one voice: “We Remember” and “Never Again.”

You can also watch two video clips from the event here and here.

#TogetherWeRemember: The Future of Our Past

Join South Florida’s next-generation of inspiring community leaders, artists and change-makers at Sanborn Square in Downtown Boca Raton, FL on Tuesday, April 16th from 6:00 PM – 8:00 PM for a community-wide vigil, dialogue, and call to action aiming to unite our city across lines of difference to address rising hatred and ongoing violence. This event seeks to remind us of the past while looking to the future, through an exploration of the meaning of “never again” in South Florida and how we, as a community, can continue to work to make that dream a reality.

We will honor the victims of violence around the world through a powerful name-reading ceremony, hear inspiring performances that open hearts and minds, learn from influential community members about issues of violence and remembrance, and participate in a bridge-building dialogue. To celebrate and activate our renewed commitment to look out for one another, we will host a concluding celebration with food trucks and feature game-changing organizations that you can immediately take action with. This event is one of dozens of #TogetherWeRemember vigils taking place around the world in April to transform remembrance into action during Genocide Awareness Month. 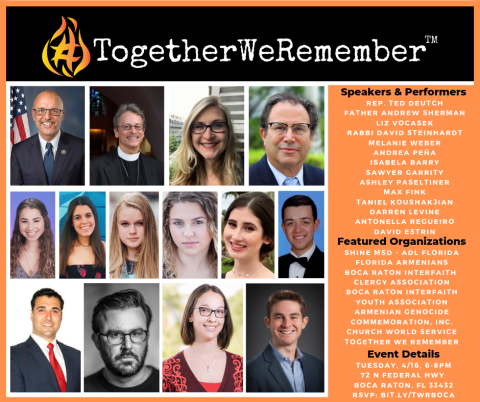