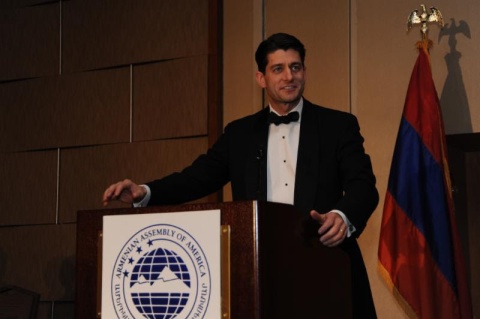 Yesterday, Representative Paul D. Ryan (R-WI) was elected the 54th Speaker of the U.S. House of Representatives. The Armenian Assembly of America (Assembly) and Florida Armenians congratulate Speaker Ryan on his new leadership role and look forward to working with him in the months and years to come.

“I am very pleased with what this means for Republican leadership in Washington,” stated Florida Armenians Miami Chair Harout Samra. “Paul Ryan’s elevation to Speaker of the House is a welcome event and turns the page on some of the key challenges the Republican caucus in the House has faced over the last several years. At least in the short term, we should expect a more unified and ideas-driven caucus. Florida Armenians congratulate Speaker Ryan and we look forward to working with him and his leadership team to address issues of mutual concern,” Samra said.

Ryan began his political career as a congressional intern after college, went on to work as an aide for then-U.S. Senator Sam Brownback (R-KS), and later as a speech writer for 1996 Republican Vice Presidential nominee Jack Kemp. In 1998, Ryan was elected to his first term in the U.S. House of Representatives. Ryan, known as a policy and budget wonk, has ascended through the House Republican leadership, assuming the Chairmanship of the Budget Committee in 2011, and most recently as the Chairman of the powerful House Ways & Means Committee. Ryan received national attention when he was tapped by Governor Mitt Romney to be the Republican Vice Presidential nominee in 2012.

Speaker Ryan has a strong record in support of Armenia, Armenian American issues including genocide affirmation, and the safety and security of the people of Nagorno Karabakh. Paul Ryan represents the 1st district of Wisconsin, which is home to St. Mesrob Armenian Apostolic Church, in Racine.

“By properly recognizing the atrocities committed against the Armenian people as ‘genocide’ in your statement, you will honor the many Americans who helped launch our first international human rights campaign to end the carnage and protect the survivors. The official U.S. response mirrored the overwhelming reaction by the American public to this crime against humanity, and as such, constitutes a proud, irrefutable and groundbreaking chapter in U.S. diplomatic history,” reads the 2004 letter to President Bush signed by Ryan.

Having joined the Congressional Caucus on Armenian Issues in 2003, Ryan’s support of human rights issues extended beyond Armenia. That same year, Ryan cosponsored H.Res.193 in the 108th Congress, which stated U.S. policy “Reaffirming support of the Convention on the Prevention and Punishment of the Crime of Genocide and anticipating the 15th anniversary of the enactment of the Genocide Convention Implementation Act of 1987 (the Proxmire Act) on November 4, 2003.”

Speaker Ryan was also a proponent of a stronger U.S.-Armenia relationship and increased bilateral trade and investment. He cosponsored H.Res.528 in the 108th Congress, “To authorize the extension of nondiscriminatory treatment (normal trade relations treatment) to the products of Armenia,” which extended U.S. Permanent Normal Trade Relations (PNTR) to Armenia.

Speaker Ryan also signed a letter to Secretary of State Condoleezza Rice on February 15, 2008 urging the U.S. “to hold the government of Azerbaijan accountable for recent vitriolic comments made by Azeri President Ilham Aliyev in regard to the conflict over Nagorno-Karabakh,” and to “condemn these comments that go directly against the United State stated policy in the South Caucus region.”

Given his years of work with the Armenian Assembly of America, and decade-long record in support of Armenian American issues, Ryan agreed to serve as the co-master of ceremonies of the Assembly’s 2009 National Advocacy Conference & Banquet in Washington, D.C.

“At a time when Azerbaijan continues to violate international law, and Turkey’s international campaign of genocide denial continues, we look forward to the opportunity to work with the incoming Speaker to address these and other critically important issues,” stated Armenian Assembly Executive Director Bryan Ardouny.