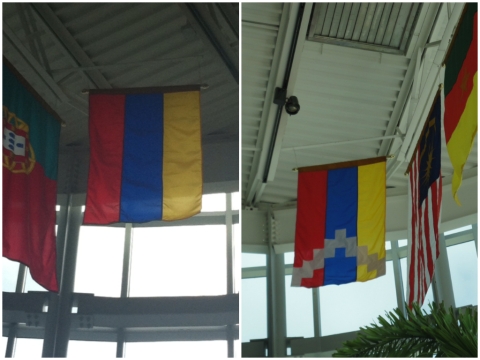 The Flags of Armenia (left) and Nagorno Karabakh (right)

Last month, the flags of two tiny South Caucasus countries got their day in the sunlight at one of Florida’s largest universities. We’re talking, of course, about the republics of Armenia and Nagorno-Karabakh, two Christian, land-locked countries that are roughly the size of Maryland and Rhode Island, respectively.  On March 11, the two flags were raised in the Atrium of Florida International University (FIU), where the colors of several other countries hang. Tucked away in a far away region known as the South Caucasus, Armenia and Nagorno Karabakh declared their independence after the fall of the Soviet Union.

FIU Junior Gevorg Shahbazyan led the effort to have the flags raised. “Every time I walked into the Graham Center, I would look up, but never see the [Armenian] flag,” Shahbazyan told FLArmenians.com. “So I decided to do something about it.” After a month of back and forth with school officials he was able to meet with the person responsible and arranged to have the flags procured and hung. “I always wanted to see the Armenian flag with the other flags,” he said.

Originally from Yerevan, Armenia, Gevorg Shahbazyan and his family first moved to Los Angeles, California, before settling in Miami in 2010. An aspiring diplomat, Shahbazyan is currently studying international relations and hopes to attend graduate school.

Although the flags of Armenia and Nagorno Karabakh have been raised, they are smaller in size than the other flags. Shahbazyan said that full sized flags have to be custom made, so they have been ordered and should be up soon. Thanks to the help of Carlos F. Carrasco, the senior director of business and finance, and Ruth Hamilton, executive director of student affairs, Shahbazyan’s efforts were successful.

Shahbazyan has even been encouraged by faculty and staff to start an Armenian club at FIU. There are only a few students at FIU, but Shahbazyan said he hopes to “introduce our culture to FIU Panthers.” If established, it would be the only active Armenian student club in South Florida.