The poll revealed a key finding: 46% of the population thinks that “Armenia is headed in the wrong direction,” while only 34% thinks that the country is headed in “the right direction.” This indicates that Prime Minister Nikol Pashinyan’s often-repeated boast that he enjoys “the people’s mandate” is not necessarily so. This is a significant shift from the 54% of the votes the Prime Minister’s political party received in the June 20, 2021 parliamentary elections. More importantly, the number of those who think that Armenia is headed in the wrong direction increased from 20% in May 21, 2021 to 34% in July 2021 and 46% in December 2021.

However, on another important question, “Do you believe that you or people like you can influence decisions made in our country,” 66% said yes, while 33% said no. This is definitely a positive indication for the authorities.

The next question: “Are you satisfied or dissatisfied with the way democracy is developing in our country?” the country was almost evenly split: 51% yes and 47% no.

The survey then asked if the respondents agreed or disagreed with the following three questions:

Most survey respondents disagreed with Pashinyan that opening roads with Azerbaijan is beneficial to Armenia. When asked: “How will the opening of transport routes with Azerbaijan impact Armenia’s economic development?” 27% gave a positive answer; 59% negative.

The same is true for Turkey. When asked: “How will the opening of transport routes with Turkey impact Armenia’s economic development?” 35% gave a positive answer; 53% negative.

When asked: “How important is the resolution to the Artsakh conflict for the future of Armenia in the next 10 years?” The overwhelming 96 % said “important”; 3% “unimportant.”

The survey asked: “What would be an acceptable solution of the Artsakh conflict?”

When asked: “Is Armenia able to independently defend its borders with Azerbaijan, without the help of any other country?” 46% said yes; 53% no.

Whether we agree or disagree, these are the answers that the people of Armenia gave. It reflects their current mindset.

As a presidential candidate, Biden promised to acknowledge the Armenian Genocide. But, since Armenian-Americans were deceived so many times by previous presidents who had not kept their campaign promises, they were cautiously optimistic about Biden’s commitment.

Even though the United States had repeatedly recognized the Armenian Genocide beginning in 1951 when the U.S. government submitted an official document to the World Court; the U.S. House of Representatives adopted three resolutions in 1975, 1984 and 2019; the U.S. Senate unanimously adopted a resolution in 2019; and President Reagan issued a Presidential Proclamation on April 22, 1981, President Biden’s acknowledgment of the Armenian Genocide in 2021 is a major step forward with several positive consequences:

Let us now see what the Turkish government may do in retaliation. Will it temporarily recall its Ambassador from Washington, threaten to cut off commercial ties or block the U.S. government from using the Incirlik airbase in Turkey? I hope Erdogan will take all of these steps and many more. With such actions, Turkey will exacerbate U.S.-Turkish relations, provide worldwide publicity to the Armenian Genocide and drive its failing economy into bankruptcy. This could lead to internal turmoil and the eventual removal of Erdogan from the presidency during the next election, if not sooner. Interestingly, in a lengthy televised speech to the Turkish nation late at night on April 26, besides his usual lies about the Armenian Genocide, Erdogan dared not announce any actions against the US in retaliation to Biden’s April 24 statement. Thus, Erdogan displayed his utter humiliation and impotence.

As usual, not having been able to bully the U.S. into abandoning its plans to recognize the Genocide, Turkish leaders are now resorting to their usual tricks by stating that the US recognition does not mean anything. If it meant nothing, why did Turkey spend millions of dollars on lobbyists for several decades and pressure the U.S. government, threatening dire consequences?

Rather than continuing the lies and denials for over a century, it would be much better for Turkey to simply acknowledge the crimes of its predecessors, ask for forgiveness and make amends for the horrendous damages caused to the Armenian people. Turkey would do well to follow the example of Germany after the Holocaust. Germany apologized for Hitler’s mass crimes, erected memorials for the Holocaust victims and paid billions of dollars in reparations. That’s what civilized nations do when their leaders commit a grave crime.

In the meantime, Armenians around the world should pursue their demands through legal channels by filing multiple lawsuits against Turkey in various country courts and the European Court of Human Rights, seeking restitution for the damages caused by the Genocide. The government of Armenia, on the other hand, should take Turkey to the International Court of Justice (World Court), where only governments have the standing to file lawsuits.

Finally, this is the appropriate moment to remember and acknowledge a great friend of Armenians, former U.S. Ambassador to Armenia John Marshall Evans, whose diplomatic career was cut short in 2006 after he told the truth about the Armenian Genocide during a visit to California. It would be only proper for the Biden administration to appoint Evans as the next US Ambassador to Armenia. This is the least the US government could do, after the President issues an official apology to him.

Harut Sassounian is the publisher of The California Courier, a weekly newspaper based in Glendale, California. He is the president of the Armenia Artsakh Fund, a non-profit organization that has donated to Armenia and Artsakh $917 million of humanitarian aid, mostly medicines, since 1989 (including its predecessor, the United Armenian Fund). He has been decorated by the presidents of Armenia and Artsakh and the heads of the Armenian Apostolic and Catholic churches. He is also the recipient of the Ellis Island Medal of Honor.

Rep. Alcee L. Hastings (D-FL) is the latest transmitter of Azeri propaganda. He issued a statement on February 25, 2019, which he entered in the Congressional Record, accusing Armenians of killing 613 Azeri men, women, and children on Feb. 26, 1992, in the Khojaly village of Azerbaijan during the height of the Artsakh (Karabagh) war. Human Rights Watch placed the number of Azeri dead at 161. Nevertheless, even the single loss of life is regrettable be it Azeri or Armenian. Rep. Hastings, a member of Azerbaijan Congressional Caucus, called the alleged killings “the Khojaly Massacre.”

These killings are controversial with Armenians and Azeris blaming each other for the deaths. In recent years, the government of Azerbaijan has made these killings a cause celebre, organizing observances in various countries and accusing Armenians not only of committing a massacre, but a genocide. These propaganda observances are funded by what is known as “caviar diplomacy,” meaning that Azerbaijan bribes government officials around the world to block decisions critical of Azerbaijan or adopt resolutions in its favor. 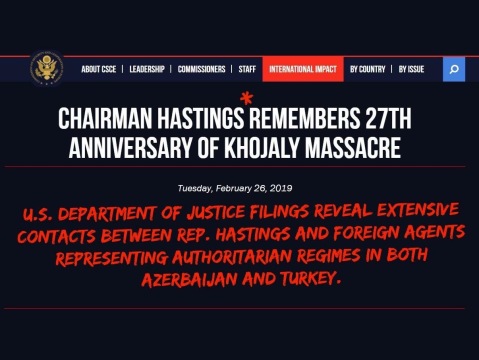 It is ironic that while Azerbaijan describes the alleged killing of 613 Azeris a genocide, it shamelessly denies the actual genocide of 1.5 million Armenians from 1915 to 1923.

On March 3, 1997, the Armenian Foreign Ministry circulated a statement to members of the United Nations General Assembly and Security Council, rejecting the statement issued by Azerbaijan on February 22, 1997 on “the Khojalu event.” Armenia quoted the words of the then President of Azerbaijan Ayaz Mutalibov who had stated that the Azerbaijani National Front “actively obstructed and actually prevented the exodus of the local [Azeri] population through the mountain passages specifically left open by Karabakh Armenians to facilitate the flight of the civilian population.” Mutalibov had made that statement in the days following “the Khojalu event” in an interview with Czech journalist Dana Mazalova published in the April 2, 1992 issue of the Russian newspaper Nizavisimaya Gazeta.

By organizing such propaganda observances, Azerbaijan’s officials have found a convenient way of countering the mass murder of Armenians in the Azeri towns of Sumgait (Feb. 28, 1988), Gyanja (November 1988), and Baku (January 1990) as well as the Armenian genocide by Ottoman Turkey.

Azerbaijan could not have found a more infamous member of U.S. Congress to carry out its propaganda war against Armenia. Prior to becoming a member of Congress, Hastings served as a United States District or Federal Judge from 1979 to 1989, at which time he was impeached and removed from office!

According to Wikipedia, “In 1981, [Judge] Hastings was charged with accepting a $150,000 bribe in exchange for a lenient sentence and a return of seized assets for 21 counts of racketeering by Frank and Thomas Romano, and of perjury in his testimony about the case. In 1983, he was acquitted by a jury after his alleged co-conspirator, William Borders, refused to testify in court, resulting in a jail sentence for Borders.”

“In 1988, the Democratic-controlled United States House of Representatives took up the case, and Hastings was impeached for bribery and perjury by a vote of 413–3. He was then convicted on October 20, 1989, by the United States Senate, becoming the sixth federal judge in the history of the United States to be removed from office by the Senate. The Senate, in two hours of roll calls, voted on 11 of the 17 articles of impeachment. It convicted Hastings of eight of the 11 articles. The vote on the first article was 69 for and 26 opposed….”

Rep. Hastings was disgraced for the second time when a staff member of the Helsinki Commission for which he was the Chairman, accused him of inappropriate sexual behavior. The Roll Call newspaper reported on December 8, 2017 that the U.S. Treasury Department secretly paid the staffer $220,000 to settle an alleged sexual harassment case against Rep. Hastings.

Winsome Packer, the staff member of the congressional commission, stated in a written document that Congressman Hastings touched her, made unwanted sexual advances, and threatened her job. In her lawsuit, Packer stated “that Hastings repeatedly asked to stay at her apartment or to visit her hotel room. Packer also said he frequently hugged her, and once asked her what kind of underwear she was wearing,” according to Roll Call. Congressman Hastings denied the accusation.

Finally, it appears that Rep. Hastings has maintained extensive contacts with the BGR Group, a major U.S. firm that is paid $50,000 a month to lobby for Azerbaijan in Washington.

Under the federal FARA (Foreign Agents Registration Act) laws, every lobbying firm has to register with the U.S. Department of Justice, disclosing the contract signed with the foreign entity. More importantly, the lobbying firm’s employees are required to report to the Justice Department every contact they make with outsiders on behalf of their clients, whether by email, phone call, or personal meeting.

For example, during the six-month period of December 1, 2017 to May 30, 2018, BGR reported contacting congressional offices hundreds of times. Each time the subject matter was listed as “U.S.-Azerbaijan Relations.” Cleverly, BGR had hidden the name of the Congressman or Senator, mentioning only his or her staff member’s name.

Armenian National Committee of America (ANCA) conducted a lengthy investigation to identify the names of the Congress members for whom these staff members worked. The ANCA investigation disclosed that on Nov. 17, 2017, Feb. 27, March 5, March 12, April 30, May 22, May 23, and May 30, 2018 BGR lobbyists emailed Tom Carnes, a staff member of Rep. Hastings. BGR also had a meeting with Tom Carnes on May 30, 2018. In addition, on May 22, 2018, lobbyists from BGR e-mailed Susannah Jackson of Rep. Hastings office. In addition, on Nov. 2, 2017, Rob Mangas, Tim Hutchinson, K. Laurie McKay, Killoran Long, and Albert Wynn on behalf of a lobbying firm for Turkey, Greenberg Traurig, had discussions with Lale Morrison from the Office of Rep. Alcee Hastings regarding U.S.-Turkish relations. Finally, on Oct. 27, 2017, Lydia Borland on behalf of another lobbying firm for Turkey, LB International Solutions, LLC, met with Lale Morrison from the Office of Rep. Hastings regarding U.S.-Turkey relations.

Azerbaijan has tried to cover up its crimes against Armenians and human rights violations of its deprived citizens by bribing foreign officials around the world and blaming others for its own wrongdoing.

Harut Sassounian is the Publisher of the California Courier, one of the oldest English-language Armenian weekly newspapers in America.