After touring the museum, Giuliani laid flowers at the memorial and planted a symbolic tree in the park in honor of Armenian Genocide victims.

He also signed the guestbook at the memorial.

“The Armenian Genocide should not be forgotten because to do so is to make possible similar horrific acts of terror in our era and in the future,” Giuliani wrote. “The recognition of this Genocide will help prevent such inhumanities in the future. God bless the souls of all who died and may they rest in peace with God.”

Speaking to reporters about possible U.S. recognition of the Armenian Genocide, he said that the genocide is a historical fact, but “I am not here in my capacity as a private lawyer to President Trump. I am here as a private citizen. It’s up to the [Trump] administration to make their own conclusion,” Giuliani said.

In his first two years as President, Donald Trump has issued statements that echo former President Barack Obama and those before him that have sidestepped the issue in order to appease Turkey, a NATO ally.

Giuliani was also asked about the expansion of U.S.-Armenia relations. “It’s up to the two governments,” he said. U.S. National Security Advisor John Bolton is currently in Moscow and will travel to Yerevan later this week.

As the Mayor of New York City at the time of the September 11, 2001 terrorist attack, Rudy Giuliani, who owns a home in Palm Beach, FL, is a former Republican presidential candidate, and a public figure well known to Armenian Americans, tens of thousands of whom call New York City, and Palm Beach County, home. In fact, several Armenian Americans were among those killed on 9/11.

“I’m here as a private citizen, just to learn some facts in my first time in Armenia. I know the Armenian community in America very well,” he said.

Rudy Giuliani was invited to Armenia to participate in the Eurasian Forum by Ara Abrahamyan, the UNESCO Goodwill Ambassador and President of the Union of Armenians of Russia who is close to Russian President Vladimir Putin.

Rudy Giuliani meeting with Davit Tonoyan at the Armenian Ministry of Defense (October 22, 2018).

During his trip, Giuliani visited Armenia’s Minister of Defense and met with Davit Tonoyan, acting Defense Minister of Armenia. Tonoyan and Giuliani discussed the current security environment in Armenia and the South Caucasus. They exchanged views on a number of regional and international issues.

Over the last two decades, U.S. engagement in the South Caucasus has been sparse, allowing Russia to strengthen it’s grip. However, the low flame of U.S.-Armenia relations has found new fuel since Armenia’s ‘Velvet Revolution’ earlier this year. The latest color revolution to hit the former Soviet space, hundreds of thousands of people descended onto the streets of the capital to demand the resignation of Serzh Sargsyan, Armenia’s President-turned-Prime Minister (the Armenian Constitution was amended by the President’s ruling party in 2015, thus transferring greater power to the Prime Ministerial post as Sargsyan’s Presidential term was coming to an end).

The largest citizen assembly since the country declared its independence in 1991 worked, and Sargsyan stepped aside without a single shot being fired. The peaceful revolution symbolized a clear rejection of the Putin style of authoritarian democracy that has expanded in the region (see Azerbaijan, Turkey) and across the globe.

During the Eurasia Forum, Armenia’s new Prime Minister Nikol Pashinyan commented on the recent and upcoming visits of senior U.S. officials and ties between to the two countries. “Unfortunately, as for the U.S. our contacts were not so intensive until now.” On October 15, U.S. Deputy Assistant Secretary of State George Kent visited Armenia and met with Pashinyan. U.S. National Security Advisor John Bolton is expected later this week.

“We are going to intensify our relations,” Pashinyan said. 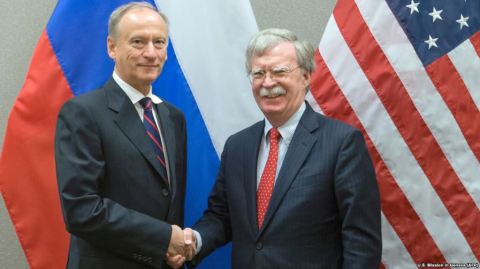 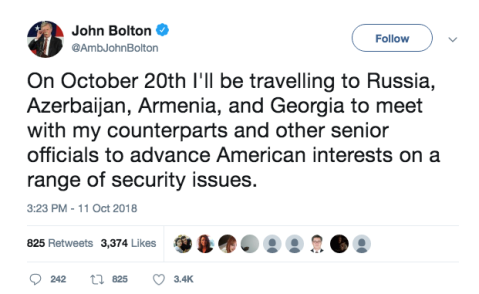