Why Donald Trump Should Recognize the Armenian Genocide 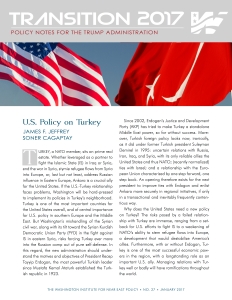 Last month, a report on how Donald Trump’s administration should build a political dialogue with Turkey was published at the website of the Washington Institute for Near East Policy. The authors of this work are James F. Jeffrey, the former U.S. ambassador to Turkey during the presidency of George W. Bush (2008-2010), and Soner Cagaptay, the director of the Turkish Research Program at The Washington Institute. Recommendations of the authors cover a wide range of geopolitical issues that the United States and Turkey should solve by joining their efforts.

It is noteworthy that Mr. Jeffrey and Mr. Cagaptay mark the necessity for Trump’s administration to guarantee non-recognition of the Armenian Genocide as an important condition for restoration of trust between the U.S. and Turkey. In particular, the authors write: “Separately, the United States can quietly guarantee Turkey that the Armenian Genocide resolution in Congress will not pass. This has always been critical in the relationship and most Turks care deeply about the issue.” There is no doubt that the authors aim not only to influence on the development of the foreign policy of the new administration for Turkey, but also to remind that the Armenian question can have a negative impact on bilateral relations.

Certainly, the representatives of the pro-Turkish lobby groups can develop their own recommendations for the foreign relations between Washington and Ankara. This is a normal practice of lobbying. However, the authors, speaking about the need to block the recognition of the Armenian Genocide, make a number of serious mistakes. First, this question is an internal affair of the United States. We must not forget that the requirement to recognize the historical events of 1915-1923 in the Ottoman Empire comes from the millions of citizens of America and is purely humanitarian. American Armenians do not require official Washington to take any steps against Turkey.

On the other hand, the representatives of U.S.-Armenian relations have always stressed that the recognition of the Armenian Genocide by the United States and Turkey will be a good signal and will allow the establishment of Armenian-Turkish dialogue in the future. Unfortunately, the Turkish authorities turned the Armenian issue into an instrument of political blackmail and intimidation.

Secondly, it is an incorrect recommendation to the U.S. president to influence Congress to prevent the passage of the resolution on the Genocide. This is not just interference in the internal affairs of a sovereign country, but also a call for the executive power to put pressure on the legislators, which cannot but arouse the indignation of American citizens.

Concerning the Armenian issue, I would like to give an alternative view to the next administration. During the Cold War, Turkey was considered one of the most important strategic allies in the bilateral format and in the framework of NATO. On the basis of pragmatic considerations, the White House and the leaders of both parties in Congress believed that an open discussion of the Armenian issue could cause a negative reaction from Turkey. The situation changed in 1974, when Turkey sent troops to the territory of Cyprus. In response to this act of aggression, Congress declared an arms embargo on Turkey. A series of further events led to a serious cooling of U.S.-Turkish relations. Then Washington did not prevent the adoption of Resolution No. 148 on the “Day of Remembrance of the Victims of Inhuman Crimes.” According to the adopted resolution, the 24th of April was officially proclaimed the day of remembrance of victims of the Armenian Genocide. Thus, the United States at that time became the only country in the world whose president officially addressed to the Armenian people on every 24th of April.

In 1978, the U.S. president, Jimmy Carter, used the term “genocide” for the first time in his statement to describe the events of 1915-1923 in the Ottoman Empire. Carter noted that, while preparing for the meeting with the Armenian community, he spent a lot of time in Roosevelt’s room and carefully studied the documents related to the Armenians’ history. The president said he was impressed by the force of will and talent of Armenian people and that as the U.S. citizens, Armenians made an enormous contribution to the development of the country. Carter said that not many people knew that a few years prior to 1915, a deliberate effort was taken to destroy the Armenian people. At the end of his speech, he stated that the Armenian Genocide was one of the greatest tragedies that ever befell any group of people, and no trial similar to Nuremberg was conducted over the criminals.

In the very first year of his presidency, Ronald Reagan demonstrated support for the Armenian-American community in the international recognition of the Armenian Genocide. In his proclamation No. 4838 on April 22 in 1981, Reagan remarked that the United States was aware of the fact and understood that the criminal government that had committed inhuman acts of genocide had to acknowledge its past and repent for it. Reagan said there was an eternal debt of all mankind toward those who had experienced these horrors. He urged the international community to remember that the lessons of the Holocaust, as well as of the Armenian Genocide, the ensuing genocide of the Cambodians, and numerous persecutions against other nations, could never be forgotten.

On the 11th of April in 1985, the Republican majority leader – Senator Robert Dole – introduced Resolution No. 247 on the “Day of Memory of the Armenian Genocide in the Ottoman Empire” to Congress. The hearing in the Committee on Foreign Affairs of the House of Representatives was successful, and Speaker Tip O’Neill put the resolution on a general vote. Turkey threatened that in case of adoption, it would refuse to buy eleven U.S. Boeing aircraft for the benefit of aircraft of the European consortium Airbus Industries. Moreover, Turkey claimed that it would cease to prolong the Defense and Economic Cooperation Agreement.

President Reagan assured Turkey’s Prime Minister Ozal that the administration was committed to maintaining a high level of appropriations for Turkey. The U.S. president was referring to the majority in Congress held by Democrats, whom he could not influence. Regardless of quite logical explanations given by the White House, the Turkish side did not conceal its irritation. Ankara stated again that it would prepare for the revision of the U.S.-Turkish agreement on military and economic cooperation. America, which at that time was going through a period of difficult relations with Greece, was close to losing access to its military bases in Turkey. It was for that reason that the U.S.’s Secretary of State Schulz arrived to the negotiations on the extension of the agreement in Ankara.

Trying to prevent the recognition of the Armenian Genocide, the pro-Turkish lobbies were interfering in the electoral process. Thus, Ankara and its lobbyists campaigned against Mike Dukakis – an ethnic Greek who was the candidate of the Democratic Party in the presidential elections of 1988. They also opposed George Deukmejian, an ethnic Armenian and the governor of California, who was considered by George Bush, Sr. for the post of the U.S. vice president. During their election campaigns, presidents Bill Clinton, George W. Bush, and Barack Obama talked about the need to tell the truth about the Armenian Genocide at the highest level. However, being in the Oval Office, they broke their promises for fear of spoiling relations with Turkey. These examples from history show that the Turkish authorities and the pro-Turkish lobbyists have always used intimidation tactics when it comes to the Armenian issue. Donald Trump poses himself as a leader who will protect the interests of America and Americans. In this case, the new president and his administration should not allow Turkey to interfere in the internal affairs of the United States.

Moreover, Turkey’s statements that adoption of a resolution recognizing the Armenian Genocide may harm relations with the U.S. are greatly exaggerated. Nowadays, the laws on the Armenian Genocide have been adopted in more than twenty countries around the world, including Russia, France, and Germany. Did Russia’s recognition of the Armenian Genocide have an impact on its bilateral relations with Turkey? No. Official Ankara has traditionally protested and threatened with deterioration in relations. However, in reality, we are witnessing active development of Russian-Turkish ties in the political, economic, trade, tourism, and energy sectors. There was a similar scenario regarding Turkish-French relations after Paris officially recognized the Armenian Genocide. By the way, France and Germany, being Turkey’s NATO allies, take their own domestic political decisions without fear of Ankara’s threats.

In this regard, the new administration should clearly express its position on the Armenian issue and should not be afraid of threats from Turkey and its lobbyists. Anyway, President Trump has two ways to solve this issue. He can continue the policy of denying the Armenian Genocide (as Bush and Obama did), or he can choose a different path and become the president who had enough courage to restore historical justice. I hope Trump will choose the path of Ronald Reagan instead of the one of Barack Obama.

This article originally appeared in The American Thinker.

Areg Galstyan, Ph.D., is a regular contributor to The National Interest, Forbes, and The Hill and the head of the “American Studies” Research Centre. You can follow him on Twitter @Galstran_Areg.