ASBURY PARK, N.J.—Hundreds of Armenians will once again flock to the Jersey Shore’s historic Asbury Park to spend a weekend full of camaraderie and tradition during “Return to Asbury.”

Now in its fourth year, this unique event has gained immense popularity and draws Armenians from the East and West Coasts for a weekend of socializing on the beach, dancing to traditional Armenian kef music, and participating in tavloo and volleyball games.

“Return to Asbury,” hosted by the New York Armenian Students’ Association and Florida Armenians, has ushered in a new generation of Armenians, emulating those before them who gathered there in Asbury Park in the mid-20th century, when the city’s summers were full of Armenian hotels and nightly “kef” concerts. One of the highlights of those summer weekends was the Vosbikian Band, who will play at the historic Asbury Park Convention Hall after a 50-year hiatus in a special one night-only performance. 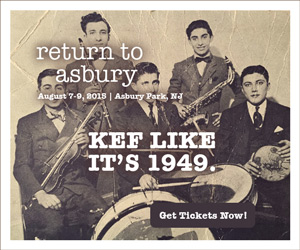 “I have many fond memories of Asbury Park during the 1960’s and 70’s,” said band member Steve Vosbikian. “During the summer months, the hotels would swell with Armenians from New York, New Jersey, Pennsylvania and Connecticut, and no matter where you turned there was an Armenian scene going on.”

Although the Asbury summers had diminished by the end of the 1970’s, the idea of bringing a new generation of Armenians together to this significant spot in Armenian-American history was conceived by Robin Barone four years ago.

“I am humbled by how the community has rallied around the vision and its growth over the years,” said Barone. “I am overjoyed when I am told that an individual loves to attend to be Armenian among other Armenians.”

This year’s “Return to Asbury,” in the capable hands of Arsine Kaloustian and Taniel Koushakjian, promises traditional events as well as exciting new ones. A happy hour at the beachfront Watermark will kick off the weekend, followed by a day of fun and games on the 7th Avenue beach and a night of dancing at the historic Asbury Park Convention Hall featuring the Artsakh Band and the Vosbikian Band.

“This year’s Return to Asbury has particular meaning for me as we have all seen our communities band together recently as we continue to commemorate the Centennial of the Armenian Genocide,” said Kaloustian, chair of Return to Asbury. “We have all drawn closer to our culture this year and Asbury Park plays such a big role in that culture, having brought countless Armenians to the Jersey Shore since the 1930’s. It is a beacon of so much of what makes us proud to be Armenian—tradition, music, food, family, and the sheer joy that comes from just being around each other.”

“Return to Asbury is a time honored tradition spanning four generations of Armenian culture in America,” said Koushakjian, founder of Florida Armenians. “Many East Coast Armenians grew up hearing about Asbury Kef, and, like me, didn’t realize the impact it had on our community. I’m honored to help keep ‘Return to Asbury’ going and make this year’s kef better than ever.”

“Return to Asbury” will take place from Aug. 7-9. For tickets and more information, visit www.returntoasbury2015.eventbrite.com or e-mail returntoasbury@gmail.com.

This article originally appeared in the Armenian Weekly and is republished with the expressed written consent of the author.

Florida Armenians Gearing Up for Return to Asbury 2015

Return to Asbury is pleased to be going into its 4th revival year in a row – and it is bigger and better than ever. With over 260 tickets sold so far, and prices set to go up on Wednesday, July 22, 2015, now is the time to join hundreds of Armenian Americans from across the U.S. in one of the oldest traditions – kef on the beach!

There’s something for everyone – join us at the Watermark Lounge for a welcoming cocktail on Friday night, then play Tavloo with the best of them on Saturday morning, and be sure to get some sun on the 7th Avenue beach Saturday afternoon (look for the Armenian flags!), or grab a drink poolside as the sun sets. Finally, this year’s attendees will become part of the first Armenians to attend a Kef at the Historic Asbury Park Convention Hall! You will be surrounded by hundreds of friends and family, making memories to talk about for years to come.

This year’s much-awaited ‘Armenian Kef Weekend on the Beach’ will feature the amazing Artsakh Band and…..the return of the Vosbikian Band to Asbury Park, NJ for the first time in over 40 years! This will be a one-night-only performance so don’t delay.

Grab your friends and family and come to the beach this summer. Be a part of something that’s bigger than all of us – tradition!

Hotel rooms in Asbury Park can be found through the links below:

TICKETS SOLD ONLY IN ADVANCE