Haig Armenag Basdekian was born January 15, 1931 in Washington DC, the second of four children, Edward, Haig, Naomi and Mary to parents Armenag and Akabe Basdekian. He was raised in Washington, DC and as a young man became involved in the Armenian community and the ACYOA. 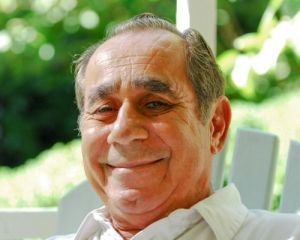 He was a founding member of the St. Mary’s Armenian Church of Washington, DC and served as its first parish council chairman. He has been a member of the Knights of Vartan for the past 50 years and was instrumental in starting the Knights of Vartan Ani Lodge in Washington, DC. He was a founding member and past commander of Hayasdan Lodge in Boca Raton, Florida.

In October, 1957, he married Mary Ann Kalyjian of Philadelphia. They were married for 40 years until her passing in 1998. Haig and Mary Ann had two wonderful daughters, Andrea, who now lives in Washington, DC, and Ani, who now lives in New York City with her fiancé Scott Yeckes.

Service to his Armenian Church and community has always been a mainstay in Haig’s life and his giving of his time, treasure and talents has been a constant, no matter where he lived and which community he served, including Armenia itself. Haig was instrumental and founding member of what eventually became the St. David Armenian Church, from its earliest years in Ft. Lauderdale. For the past 14 years, he has been a faithful and committed member and supporter of the St. Mary Armenian Church of Hollywood and was one of the godfathers of the church representing the Knights of Vartan. His presence has been a constant at St. Mary’s, in church every Sunday, always supporting the church financially as a benefactor for many church projects including the playground, and physically with his continuing volunteer efforts whenever called upon to serve.

In addition, he has been a benefactor and supporter of the Diocese’s Ararat Center, the Armenian Tree Project and in Armenia, where he donated a patient room to the Children’s Hospital in Yerevan.

In addition to his service to his Armenian church and community, Haig has always been a dedicated and devoted family man, always available with his love, his support, his encouragement and guidance to not only his children, but also to his siblings and his many nieces and nephews. In recent years, he has also been a family man for Cookie Devers and her family, son Lloyd, daughter in law Ivy, and their children, Andrew and Tatiana.