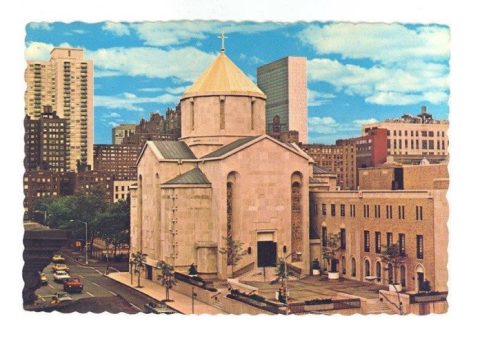 NEW YORK, NY — A written petition to request a special session of the assembly of the Eastern Diocese of the Armenian Church of America was submitted on July 22 with enough Diocesan delegates’ signatures to meet the requirement of the Diocesan bylaws. The request is for the special session prior to September 22, 2018, and prior to the execution of any agreements or commitments, to review a proposal concerning the sale or conveyance of interests of the Diocesan complex in New York City.

A copy of the petition was printed in the June 30 issue of the Mirror-Spectator.

This is apparently the first time in the history of the Diocese that such a request has been made and indicates the extraordinary attention this issue has been gathering. In fact, the Armenian Mirror-Spectator has seldom received as many letters, emails and phone calls about any other issue in recent memory.

The original proposal, which was about “monetizing the value of the air rights of the cathedral complex,” according to James Kalustian, the chairman of the council of the Eastern Diocese of the Armenian Church, was presented at the Diocesan Assembly on May 3, 2018. Members of the Diocesan community reacted almost immediately and asked that the broader community have input in whatever decision was to be reached (e.g. Hirant Gulian’s “Community Input Needed Before Deciding Fate of Diocesan Complex,” Mirror-Spectator June 2). Various interpretations of the proposal, which has not been made public, spread throughout the community, including that part of the Diocesan land as well as air rights were being sold, and some even feared the ultimate sale of the complex.

Organizations such as the Knights of Vartan, involved in the development of St. Vartan Cathedral more than 50 years ago, recently weighed in the controversy and objected to any sale or lease of any part of the Diocesan complex. Questions have been raised by others about the overall state of Diocesan finances which has led to the present situation.

The Diocese has not officially issued any circular or report to the public about this issue up until the present. Unofficially the word was that a fact sheet or explanatory article would be released to dispel misunderstandings.

Diocesan officials contacted via email by the Mirror–Spectator to verify their receipt of the petition with signatures or comment on the situation did not respond. Officials at the Diocese contacted by phone and email during the past two months with regards to this issue have declined to make any public statements.

The Mirror-Spectator has seen a copy of the set of signatures and the original email sent to Diocesan officials. Among the signatories are many Diocesan priests.

The proposal for taking advantage of the value of the Diocesan property is not the first such attempt, as a number of differing proposals have been made since the 1980s.

This article originally appeared in the Armenian Mirror-Spectator and is reprinted with the expressed written consent of the author.