Last week I wrote about the sensational revelations by Bulgarian investigative journalist Dilyana Gaytandzhieva in Trud newspaper, who reported on leaked documents that Azerbaijan’s state-run Silk Way Airlines has shipped under diplomatic cover 350 planeloads of heavy weapons and ammunition to terrorist groups around the world during the last three years.

A report by Radio Free Europe (RFE) Azeri investigative reporter Khadija Ismayilova, who has been jailed for her disclosures of Azerbaijan government’s human rights abuses, has revealed in a 2010 report on Pres. Aliyev’s daughter, Arzu Aliyeva’s part ownership of a company that is linked to Silk Way Airlines. This fact explains how the airline managed to get all the diplomatic clearances to ship such large quantities of weapons to terrorists.

It turns out that Silk Way Airlines belongs to SW Holding, a group of companies that “enjoys a near-complete monopoly of airline service,” including mid-flight meals served by Sky Catering, and taxi service run by Airport Gate, both of which are owned by SW Holding. In addition, technical maintenance of the national carrier’s planes and helicopters are carried out by Silkway Technics, and “multiple other companies controlling everything from Traveler assistance to ticket sales to duty-free stores are all owned by SW Holding,” according to Ismayilova. 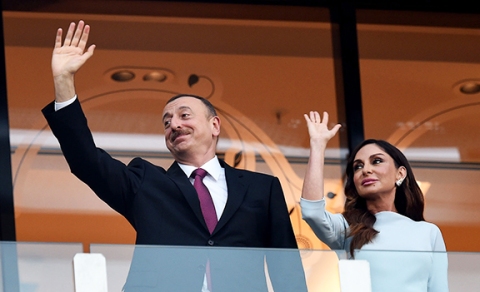 Azerbaijan’s President Ilham Aliyev and his wife, Mehirban, who was recently named the country’s Vice President

Interestingly, Ismayilova reports that “the rise of SW Holding, which has seamlessly absorbed many of AZAL’s former businesses, has raised questions about dubious privatization practices in Aliyev’s Azerbaijan. It also serves to underscore how the political elite continues to use close friends and family members to preserve its hold on the country’s most valuable assets — despite Azerbaijani laws that list nepotism by state officials as an offense punishable by up to 12 years in jail.”

Pres. Ilham Aliyev is simply continuing the practice started by his father Heydar Aliyev, who after ruling Azerbaijan for two decades passed the Presidential baton to his son. In a constitutional referendum in 2009, term limits on the President were abolished making Ilham Aliyev President for Life! Not to take any chances, he recently appointed his wife, Mehriban Aliyeva, as Vice President, to become his possible successor.

Under Azerbaijani law, public officials are prohibited from owning businesses, while family members are exempt from this restriction, a loophole exploited by the Aliyevs to hide their earnings in their children’s holdings. Just Arzu Aliyeva’s part ownership of the Silk Way Bank is worth over $12 million. According to RFE, “presidential secretary Azer Gasimov confirmed that Arzu Aliyeva was one of the owners of the Silk Way Bank.”

Gulu Khalilov, the spokesman for the State Committee on Privatization of State Property, told RFE that he had no information on the privatization of AZAL, the state airline company, including its holdings, like AZAL Bank. RFE was told that none of the legal procedures for privatization were followed.

“In the meantime, SW Holding has slowly but steadily acquired nearly all of AZAL’s former companies, including the insurance firm AZAL Sigorta, which is now co-owned by SW Holding and the two daughters of Jahangir Asgarov, the president of AZAL and the husband of Zarifa Hamzayeva, the current co-owner of Silk Way Bank,” according to Ismayilova. “SW Holding has also been the sole contractor on a number of high-profile AZAL projects, including airport-construction deals in Lankaran, Ganja, and Zagatala worth a total of $150 million.”

Pres. Aliyev and his family must be held responsible as part owners of a state-run airline that ships sophisticated weapons to terrorists around the world!