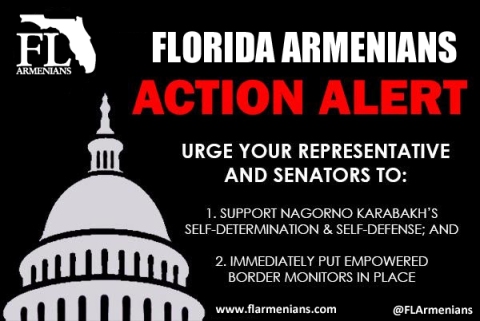 Florida Armenians joins the Armenian Assembly of America in urging Armenian Americans in Florida and all human rights activists to TAKE ACTION to denounce Azerbaijan’s latest attacks on Armenia and Nagorno Karabakh and to urge Members of Congress to defend the self-determination and freedom of Nagorno Karabakh, as well as its right to self-defense.

So far, the latest Azeri cease-fire violations have resulted in over 20 reported deaths, including a 12-year-old boy, and over 70 wounded. In addition, Azerbaijan continues to target villagers in the Tavush region of Armenia, including a kindergarten. This is unacceptable and Azerbaijan must be held accountable for these gross violations of human rights and international law. Further, the United States should stand with the citizens of the Nagorno Karabakh Republic in their struggle for self-determination as they defend themselves from another genocidal act.

We cannot stand on the sidelines as one of the most corrupt dictators in the world continues to blatantly violate the 1994 OSCE brokered cease-fire and takes aim at our brothers and sisters in Armenia and Nagorno Karabakh.

The United States has an important role to play and must stand in solidarity with the people of Artsakh and their right to defend themselves.