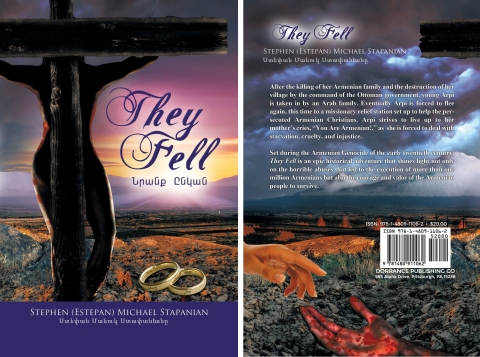 FORT LAUDERDALE, FL – The novel is called They Fell, and the title is appropriate. Drawing on Charles Aznavour’s “Ils Sont Tombes,” the author uses graphic imagery to convey the historically based horrors and is stretched over 35 character-experiences in the midst of the Armenian Genocide.

Author Stephen Stapanian of Tampa, FL sets the story in the dying days of the Ottoman Empire during World War I. As it’s read, one is reminded that a story can allow a direct communion with another era, and ultimately, with the era’s deceased.

In a response to questions submitted via email from FLArmenians.com, Mr. Stapanian says that the novel “represents a gift to the Armenian people globally, and to send a message to all of those who suffered . . . that they were not alone as victims of genocide.”

Stapanian says that he was originally inspired to write the novel after watching genocide-themed TV miniseries’ in the 1980s, such as Roots, Holocaust, and Shogun. Over time Stapanian worked on his approach and finally published They Fell on August 1, 2015.

The novel uses a love-story conceit, along with excerpts of song lyrics and poems, to draw the reading into the larger context of Ottoman Armenian life in 1915. It was written to evoke a strong emotional response about the genocide, and, fundamentally, to elicit change, he says.

But what change could he bring? The Armenian Genocide is officially recognized by over 20 nations, such as Canada, France, Russia, Germany, Austria, Argentina, the Vatican, and others. At the same time, the Ottoman Empire’s successor, Turkey, refuses to accept it’s own history and continues a decades-long campaign of genocide denial.

Historians mark the beginning of the Armenian Genocide on April 24, 1915, when the Ottoman Turkish government rounded up over 200 Armenian academics, doctors, businessmen, and religious and community leaders in Constantinople.

The lack of accountability or prosecution of the perpetrators makes recollection of the genocide sting that much more, for many, as it does Stapanian.

Historians estimate that over one million Armenians were ethnically cleansed in a systematic campaign orchestrated by the Ottoman Turkish government in what is widely considered the first genocide in modern times.

The majority of published works about the Armenian Genocide have been memoir or historical, whereas They Fell is fiction based on a historical event.

But given that the novel is predicated on something as gruesome as genocide, should the public only expect to experience a limited amount of entertainment from it?

Hopefully, readers will truly connect with the characters, and in so doing learn something from those who fell and perished in one of man’s darkest chapters.