Legendary performer and composer Yanni has announced he will celebrate the 25th Anniversary of “Live At The Acropolis” with a world tour that will launch this Spring in the United States. The “Yanni 25 – Live At The Acropolis Anniversary Concert Tour” will kick off on April 23, 2018 at the King Center in Melbourne, FL. The tour will keep him on the road through the summer, hitting cities across North America including Atlanta, Charlotte, Philadelphia, Cleveland, New York, Chicago, Montreal, Toronto, Los Angeles and more. Additional dates will be added shortly.

After playing historic sites around the globe—including India’s Taj Mahal, China’s Forbidden City and the Pyramids at Giza—renowned new age musician Yanni comes to the St. Augustine Amphitheater in St. Augustine on Friday, April 27, and at the Dr. Phillips Center in Orlando on April 30.

You don’t want to miss this legendary performance. Get your tickets today! 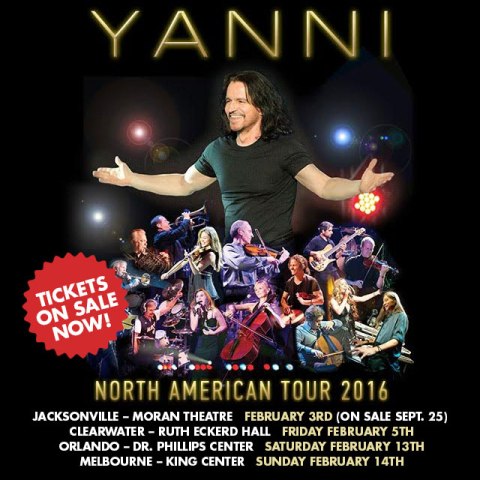