Taniel Koushakjian with H.E. Varuzhan Nersessian, Ambassador of the Republic of Armenia to the U.S., at the Embassy of Armenia in Washington, DC – February 4, 2019

WASHINGTON, DC – In February, Florida Armenians Editor Taniel Koushakjian travelled to the nation’s capital for a series of meetings with government officials, NGO’s, and policy makers. During his time, he met with Armenia’s new Ambassador to the U.S., His Excellency Varuzhan Nersesyan, and welcomed him back to the United States in his new capacity. They discussed a series of issues of concern to the Armenian American community.

Koushakjian conveyed the congratulations of several thousand Armenian Americans in Florida who cheered the democratic movement of the citizens of Armenia and the peaceful transition of power that swept across Armenia in 2018. He also invited Ambassador Nersesyan to visit the Sunshine State in 2020.

Ambassador Nersesyan is no stranger to Washington, DC. From April 2008 to December 2012, he served as Deputy Chief of Mission at the Embassy of the Republic of Armenia to the United States. 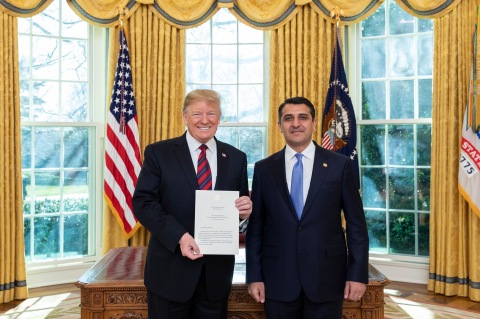 President of the United States Donald J. Trump accepts the credentials of the Ambassador of the Republic of Armenia to the U.S. His Excellency Varuzhan Nersesyan in the Oval Office, The White House, Washington, DC – January 11, 2019

Nersesyan is the first Armenian Ambassador to the U.S. under Armenian President Nikol Pashinyan. He presented his credentials to the President of the United States Donald J. Trump in a ceremony in the Oval Office on January 11, 2019. During a brief conversation, President Trump and Ambassador Nersesyan highlighted the steps towards expanding the US-Armenia bilateral relationship in several areas. The interlocutors emphasized the role of the Armenian American community in enhancing the friendship between the two nations.