Choices for authentic Armenian food in Pinellas county, or Florida in general, can be very limited, and delis that carry Armenian products are few and far between. One can find a few Middle Eastern delis in and around St. Petersburg and Pinellas Park which advertise Armenian food along with a host of other ethnic cuisines, but generally speaking these usually are not owned by Armenians and carry very few actual Armenian foods. This was my struggle after moving to Florida from California two and a half years ago. After months of trying out different delis in the area, settling for what I could find, I learned by word of mouth about Paradise International Foods in Largo, not too far from the St. Hagop Armenian Apostolic Church. When I visited, I was amazed to find products I’d not seen since I was in Armenia. 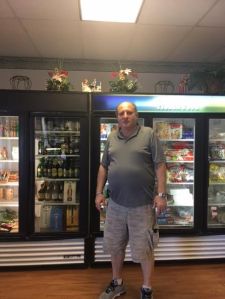 Nestled in the Mission Plaza shopping center on Starkey Road, just past the Bay Care Health Center, Paradise International Foods is truly a hidden gem for those who seek not only Armenian food, but food from other parts of Eastern Europe as well. The shop is family-owned, and managed by Rafael Aladjyan, a Georgian-Armenian from Tbilisi who ran a deli in New York City for 23 years before relocating to Largo, Florida. He and his wife had been in the deli business for so long that it was only natural to take it with them when they relocated.

“I like Largo,” he explained in Armenian. “It’s not quite St. Petersburg and it’s not quite Clearwater, but it’s close enough to both.”

On any given day, the shelves are stocked with hard-to-find Armenian imported goods rarely seen outside of California. Noyan products, lavash, tan drinks, Kilikia and Gyumri beers, and even Jermuk sparkling water adorn their shelves, making it the perfect destination for anyone in the area nostalgic for Armenia. There is always a nice selection of cheeses, from Bulgarian feta to Armenian string cheese, and occasionally they carry delicious Lori cheese imported straight from Armenia’s northern Lori province; the distinctive taste transports me back to the rolling green hills outside Vanadzor. Also not to be ignored is the wine selection, which along with selections from Georgia and elsewhere include sweet wines from Ijevan (Tavush region) and pomegranate wine bottled in Mgravan (Ararat region). The latter come in beautiful pomegranate-shaped bottles that are almost too pretty to throw away afterward.

The deli is locally popular not just with Armenians in the area; they receive a lot of Russian, Ukrainian and Jewish customers as well. Aladjyan prides himself in catering to the Eastern European community in Pinellas. One of their specialties is pilaf, prepared in the Central Asian style which during Soviet times became widely known throughout the USSR. Their desert selections are also very popular, with a lot of variety. It truly is an international paradise.

“We welcome anyone who wants to come to our store, no matter where they are from,” said Aladjyan.