The letter states: “The peaceful transition of power after the revolution is a clear indication of the will of the Armenian people, strongly demonstrating their commitment to a fairer and more democratic state. As Armenia seeks to bolster government transparency, strengthen democratic institutions, and empower civil society, it is critical for the United States to deepen its ties with this regional partner at every level of government.” 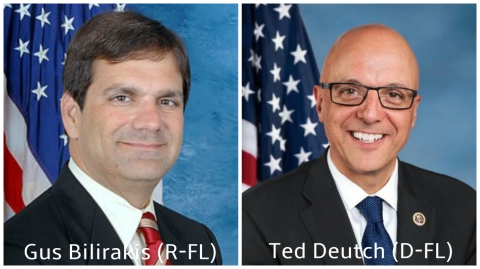 “I commend the people of Armenia for exercising their political rights and bringing about change in peaceful, democratic way,” Rep. Ted Deutch (D-FL) told FLARMENIANS. “The Velvet Revolution can serve as a model for the non-violent transfer of power. I am hopeful that the new government will serve the interests of the people and continue to bring democracy, transparency, and prosperity to Armenia,” Deutch said.

The letter to President Trump also requests “a series of high-level conversations between [the President’s] Cabinet Secretaries and their counterparts in Armenia – many of whom have recently been appointed as members of the newly formed government.”

While Armenia’s Velvet Revolution can be felt by Armenian men and women, old and young, in every corner of the Diaspora, it is especially inspiring for Armenian Americans who wish to see U.S.-Armenia bilateral relationship reach the next level.