WASHINGTON, D.C. – The Armenian National Institute (ANI) launched a new 24-panel digital exhibit displaying the role of the YMCA and American relief work during the first republic of Armenia (1918-1920). The exhibit focuses on John Elder and James O. Arroll who arrived in Yerevan, Armenia in January 1918 to open a YMCA center. As with digital exhibits previously released by ANI, American Relief in the First Republic of Armenia 1918-1920, subtitled “John Elder and James Arroll in Yerevan, Gyumri, Sevan & Etchmiadzin,” is freely downloadable from the ANI website.

Neither Elder nor Arroll had anticipated being stranded as the only Americans left in the country’s capital city with all communication to the outside world cut off when the frontline faltered. World War I was still raging at the time and Allied forces were in retreat on the Caucasian front. The November 11, 1918 Armistice that ended the global conflict was many months away, crucial months during which the very existence of the Armenian people hung in the balance.

By the time they left Yerevan in August 1919, John Elder and James O. Arroll had become responsible for the entire operation set up by U.S.-based charities that had earlier sent emergency aid and volunteer workers to Armenia. As John Elder wrote on January 16, 1919: “One year in Yerevan and what a year it has been. Had anyone told me a year ago that in addition to running a YMCA, I would be in charge of factories employing 7,500 people, orphanages with 350 children and a 120 bed hospital, I would have thought them crazy.”

ANI Chairman Van Z. Krikorian said: “The stellar example of American humanitarianism by Elder and Arroll continues to be emulated to this day. They were pathfinding pioneers who traveled all the way to Armenia during a very difficult time. All the relief workers who went to Armenia after the 1988 earthquake, and the Peace Corps volunteers who continue every year to extend their helping hand are following John Elder’s and James O. Arroll’s superb example. Armenians and Americans alike are proud to share this chapter of remarkable service to those in need.”

The exhibit reconstructs the story of the near superhuman efforts undertaken by John Elder and James O. Arroll to rescue Armenians from the many perils they faced during the 1918-1920 independent Republic of Armenia. The exhibit relies upon John Elder’s own words from his published journal, along with original records that he personally saved from the time of his service, and the photographs that he made and captioned.

Elder and Arroll arrived as two enthusiastic young men dedicated to the purpose of sustaining morale among soldiers enduring long campaigns and treacherous conditions as the Great War kept grinding on, year after year, without end. They departed as two celebrated heroes who stood by the Armenian people at the fateful hour. John Elder wrote on May 26, 1918, as Ottoman Turkish forces advanced to the outskirts of Yerevan: “You never can tell what may happen. Just as the end seems at hand the pendulum swings the other way…After a two-day battle at Sardarabad, the Turks have been completely routed.” With the decisive battle won, two days later, on May 28, 1918, Armenia declared independence.

The only Americans in Yerevan at the time, Elder and Arroll witnessed momentous events and the unfolding of a heart-wrenching humanitarian disaster as the ravages of war were revealed once the fighting stopped. A year elapsed before a new crew of relief workers reached Armenia to lighten the burden they shouldered. In the meantime, their efforts and accomplishments had become legend among admiring Armenians and fellow Americans at home.

The exhibit displays 95 images, 64 from John Elder’s photo collection, 8 contemporaneous records and documents, and 4 maps. With 32 quotations from Elder’s journal authenticating the photographs, along with introductory and explanatory text, the exhibit opens a window into life during the first year of the newly independent Armenian republic in 1918. The exhibit includes the entire set of photographs Elder attributed to his time in Armenia. 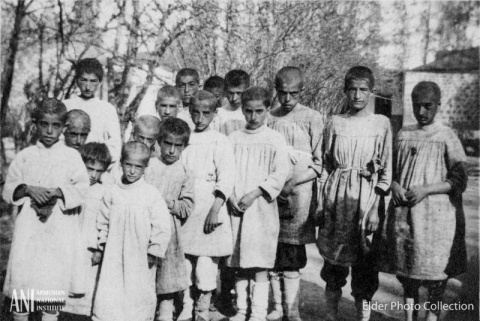 Children in the government orphanage

Other American personalities in the region appearing in the exhibit include F. Willoughby Smith, U.S. Consul in Tiflis, who supported the efforts of the relief workers; Robert McDowell, who was at the front when the Turkish forces broke through and invaded Alexandropol/Gyumri; Dr. John H.T. Main, president of Grinnell College in Iowa, who witnessed the horrific conditions in Armenia firsthand on behalf of the American Committee for Relief in the Near East; missionary Grace Knapp; and John Mott, longtime president of the American YMCA, who, with the encouragement of his friend President Woodrow Wilson, dispatched young Americans wherever they could lend civilian support behind the front to men in combat.

John Elder was particularly happy to welcome two Pennsylvania natives like himself, Pittsburgh businessman Howard Heinz, and president of the American Bar Association Walter George Smith, who traveled to Armenia on behalf of the American Relief Administration. Both were members of prominent families. Smith was married to Elizabeth Drexel, whose uncle, banker and philanthropist Anthony Drexel, founded Drexel University in Philadelphia. Smith became the most vocal American Catholic advocate of the Armenian people at the time.

“The Armenian National Institute thanks the Elder family for supporting the research undertaken to develop the exhibit, and for permitting our organization to continue to honor the memory of such a committed humanitarian,” stated ANI Director Dr. Rouben Adalian. “At the height of the conflict in the Caucasus when other relief workers chose to evacuate, John Elder refused to leave fearing that tens of thousands more Armenians would die of starvation if the relief programs were discontinued. He is credited in providing relief for 15,000 Armenian orphans. Such selfless heroism must be recognized.”

Adalian added: “I also want to thank Dr. Christina Maranci, Professor of Armenian Art and Architecture at Tufts University for lending her expertise. Dr. Andrew Anderson of the University of Calgary graciously extended permission to reproduce the very high quality map depicting the situation in the Caucasus in 1918. I thank as well the staff at the YMCA Archives for retrieving critical information about the protagonists of this exhibit.”

Dr. Adalian continued: “The YMCA exhibit should be viewed as a continuation of the historical reconstruction provided in a previously issued ANI exhibit and titled, The First Refuge and the Last Defense: The Armenian Church, Etchmiadzin, and the Armenian Genocide. That exhibit documented the extent of the spillover consequences in Eastern Armenia, then part of the Russian Empire, and of the atrocities committed in Western Armenia in the Ottoman Empire in 1915. The YMCA exhibit is a compelling reminder that the aftermath of the Armenian Genocide continued to unfold over the course of many years and spread across Eastern Armenia as well with every advancing step of the Turkish armies. The evidence gathered by John Elder demonstrates that Russian Armenia was not spared the genocide perpetrated by the Young Turk regime. He wrote on January 16, 1919: ‘Among the refugees it has been a holocaust.'”

The exhibit concludes with U.S. President Herbert Hoover’s tribute to the remarkable role of the YMCA pair who risked going to Armenia in the thick of World War I. The exhibit marking the centennial of the founding of the Armenian republic also extends appreciation to the Peace Corps volunteers today who are following in Elder’s and Arroll’s footsteps under the leadership of U.S. Ambassador to Armenia Richard M. Mills, Jr. who happened to be the State Department’s first Armenia desk officer when Armenia regained independence in 1991.