Senator Jack Latvala announces his campaign for Governor of Florida in Clearwater, FL.

On a bright and sunny August day at the Clearwater Marine Aquarium, State Senator Jack Latvala (R-Pinellas) made a highly anticipated announcement; he if officially running for Governor of Florida.

Surrounded by family, friends, and supporters, Senator Latvala made his campaign official, and told a riled up crowd why he says he is the best candidate.

“I will be the candidate who tells it to you straight. Who, when he gives you his word, will keep my word,” he said. “Anyone who I have ever served with will tell you that if you don’t think Jack Latvala keeps his word than you don’t know jack.”

Latvala is term-limited in the State Senate, as is Governor Rick Scott, whom he is seeking to replace in Tallahassee.

Prior to his 2010 election as Florida’s Commissioner of Agriculture, Adam Putnam represented Florida’s 12th Congressional District (2000-2010). He did not support or oppose any Armenian American issues or legislative initiatives during his 10-year career in Congress. A former U.S. Navy JAG officer, Rep. DeSantis, was elected to Congress in 2012 and also has no record in support of or opposition to Armenian American issues. However, it is noteworthy that Rep. DeSantis joined about a dozen of his colleagues in condemning Turkish President Recep Tayip Erdogan and his “goon squad,” after the Turkish President’s security service brutally assaulted several peaceful American demonstrators outside of the Turkish Ambassador’s residence in Washington, D.C. this past May. 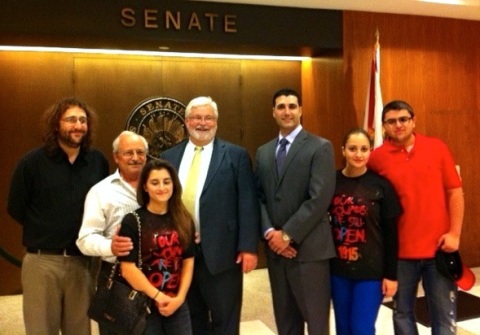 Armenian Americans at the Florida Capitol in Tallahassee with Senator Jack Latvala (R-Pinellas) following passage of the Armenian Genocide resolution outside the Senate Chambers, April 24, 2013.

As Florida Armenians reported in 2013, Senator Latvala introduced SR 1878,  recognizing “Armenian Martyrs Remembrance Day.” It was the first Armenian Genocide resolution ever passed in the Florida Senate. Armenian Americans from Tallahassee and across the state of Florida were on hand to witness the historic occasion. Latvala is the only Republican running for Governor of Florida with a positive record in support of Armenian American issues, and his leadership on genocide affirmation and human rights education in the state could be an important factor for the state’s 30,000+ Armenian Americans.

Announced Democrats for Governor of Florida include former one-term Congresswoman Gwen Graham (D-Tallahassee), Tallahassee Mayor Andrew Gillum, and Winter Park businessman Chris King. Gwen Graham is the daughter of former Senator Bob Graham (D-FL) who withdrew his cosponsorship of an Armenian Genocide recognition resolution and then voted against breaking a filibuster in a historic Senate cloture vote in 1990. The younger Graham, however, had no record in support of or opposition to Armenian American issues during her short time in Congress. Miami Beach Mayor Philip Levine (D-Miami) and Orlando attorney John Morgan are also expected to run for the Democratic nomination for Florida Governor.

Primary elections will be held in Florida on August 28, 2018.