President Theodore Roosevelt and the Armenians

WASHINGTON, DC – During his recent trip to Washington, DC in connection with the Armenian Folklife Festival in the American capital, President Armen Sarkissian of Armenia visited Roosevelt Island. He honored the legacy of the 26th president of the United States, Theodore Roosevelt (1901-1909), and his support to the Armenian people during the tragic days of our history.

“The Armenian massacre was the greatest crime of the war…,” Roosevelt wrote in a letter to Cleveland Hadley Dodge in May of 1918 after he left the White House and was residing at his house in Oyster Bay, NY. Dodge, along with U.S. Ambassador Henry Morgenthau, oversaw the creation of the American Committee for Armenian and Syrian Relief, later to be renamed Near East Relief. 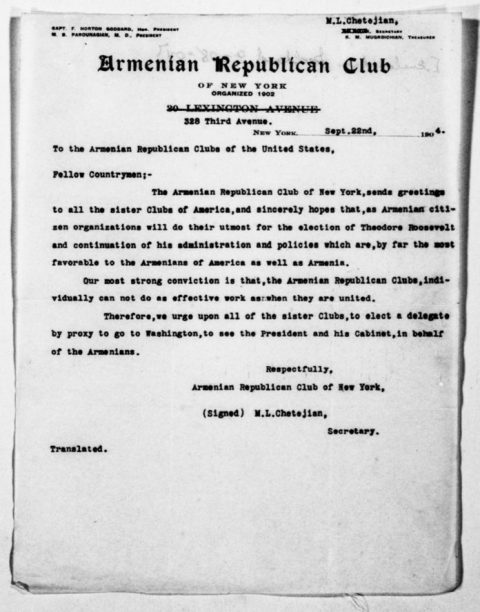 The Letters of Theodore Roosevelt, published by Harvard University Press in the 1950s, included the above-mentioned document. Roosevelt, who was historically known for his energetic and straight forward policy, was against Washington’s initial attempts to remain somewhat neutral during World War I. As is well known, even though World War I started in the summer of 1914, the U.S. joined the war later, in April of 1917, first against Germany and later against the Austro-Hungarian Empire. In his aforementioned letter, Roosevelt continued as follows:

“The Armenian horror is an accomplished fact. Its occurrence was largely due to the policy of pacifism this nation has followed for the last four years. The presence of our missionaries, and our failure to go to war, did not prevent the Turks from massacring between half a million and a million Armenians, Syrians, Greeks and Jews – the overwhelmingly majority being Armenians.” 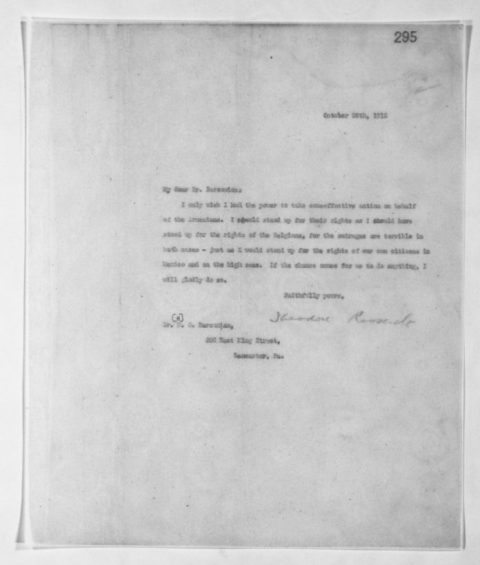 In 1900, in his book called A Strenuous Life, which technically was a collection of Roosevelt’s earlier speeches and essays, he referred to Armenia on several occasions, this time criticizing Europeans for not going into war against the Ottomans. “The great blot upon European international morality in the closing decade of this [i.e. 19th- H.N.] century has been not a war, but the infamous peace kept by the joint action of the great powers, while Turkey inflicted the last horrors of butchery, torture, and outrage upon the men, women, and children of despairing Armenia. War was avoided; peace was kept; but what a peace! Infinitely greater human misery was inflicted during this peace than in the late wars of Germany with France, of Russia with Turkey,” Roosevelt wrote referring to the Hamidian massacres of the 1890s.

Interestingly, four years later, during a meeting with the Armenian delegation at the White House, when presidential adviser James Bronson Reynolds (1861-1924) said that “since 1895, more men, women and children have been massacred in Armenia by the Turkish soldiers and their auxiliaries than were killed on both sides in the Franco-Prussian War of 1870,” Roosevelt interrupted him, saying: “You are quoting from my own book: The Strenuous Life. It was I who first made that statement.” The president was obviously referring to his statement we cited earlier.

Reynold’s presence at this meeting was not accidental: in 1901 he edited a book called Two Centuries of Christian activity at Yale. This publication featured the history of Christianity at a prominent educational establishment, also conveying the stories of overseas missionaries that had graduated from Yale. As the book specified, among the “Yale men on the foreign mission field,” several were in Van, Erzerum, Sebastia, Tigranakert and other historic Armenian settlements. Overall, there were 25 Yale-affiliated missionaries in Ottoman Empire, and one American-Armenian — Hovhannes Der Sahagian, was among them. The book also referred to the Hamidian massacres by saying that Rev. Frederick D. Greene, an 1888 graduate from the Faculty of Theology of Yale, “did more than any other man in awakening Gladstone [Prime Minister of the United Kingdom at the end of 19th century — H.N.], and later the world, to the awful needs of the suffers from the Armenian massacres, for whom he raised a fund of $260.000.” In other words, Reynolds, who edited the book, doubtlessly, was aware of Armenian issues. In 1915, Reynolds was the communication official between the Armenian community and Roosevelt.

In September 1904, when he was running for reelection, the New York City-based Armenian Republican Club appealed to fellow Republican Armenians, “hoping that Armenian citizen organizations will do their utmost for the election of Theodore Roosevelt and continuation of his administration and policies which are, by far, the most favorable to the Armenians as well as Armenia.” Republican Armenians were also planning to send a representative to Washington, D.C. to meet the President.

In December 1904, in his State of Union statement, the president mentioned: “In Turkey our difficulties arise less from the way in which our citizens are sometimes treated than from the indignation inevitably excited in seeing such fearful misrule as has been witnessed both in Armenia and Macedonia.”

In this important annual address, the president also mentioned that Americans gave expression to their horror on occasion of the massacre of Jews in in the town of Kishinev as well as on the cruelty and oppression of which the Armenians had been the victims.

Following his reelection, Roosevelt received a telegram from the then Catholicos of Armenians Mkrtich Khrimian, known also as Khrimian Hayirk. “I pray Your Excellency accepts my profound respects and heartfelt thanks for the very kind reception accorded to my delegates, the two Archbishops, who were commissioned to plead the cause of the suffering Armenian people in Turkey. I cherish the hope that the powerful voice of Your Excellency’s Government will eventually aid in bringing peace and justice to the people of unfortunate Armenia,” Catholicos Khrimian wrote. As the message implies, President had met high-ranking Armenian members of the clergy in Washington earlier.

U.S. Senator Carl Schurz (R-MO) is known for his saying, “My country right or wrong; if right to be kept right, and if wrong, to be set right.” After his retirement, Schurz was living in Northwest Bay on Lake George, New York, where in September of 1905 Roosevelt sent a letter in which he raised his concerns in regards to what was happening to the Armenians. This time, Christians were being attacked in the Caucasus by local Muslims, later to be known as Azerbaijanis. On September 14, Schurz got back to the president saying, “admitting all you say of the Armenian atrocities – have we not to face the fact that the Powers stood by without lifting a hand, although they were armed to the teeth?”

In September 1915, when the Armenian Genocide was in process, in a letter to Philadelphia-based Armenian community activist Dr. Barsoumian, the by now former-president Roosevelt mentioned that he wished he had the power to take some effective action on behalf of the Armenians. He developed his perspective later, in a different message to a Boston-based organization called Armenian National Defense Committee of America: “Gentlemen, I wish could help you, I am horrified and shocked beyond measure at the atrocities committed to the Armenians. If there is anything I can do, I shall always do for you.” This document, along with many others, is kept at the Theodore Roosevelt Center at Dickinson State University, North Dakota.

According to other sources, Roosevelt was knowledgeable on Armenian history. In 1912, during an interview granted to Armenian students he said: “I want Armenians to be able to bear arms just as they did in the days of King Tigranes, so that in the next generation no one can say that the Christian population of Turkey cannot fight.”

According to another bit of research, Roosevelt wrote in his correspondence shortly before his death: “I am doing everything I can, and shall continue to do everything I can for the Armenians.”

In 2015, the American Political Science Association ranked Roosevelt as the fourth greatest American president, leaving only Lincoln, Washington and Roosevelt’s nephew Franklin Delano Roosevelt ahead of him. The New York Times‘s Presidential Greatness Ranking from February 2018 confirmed these results. In the 1920s, Roosevelt was chosen to appear on Mount Rushmore, South Dakota, as one of four iconic American presidents.

One of America’s greatest presidents supported Armenians and the righteousness of the Armenian case, so it was completely fitting that the current president of Armenia, Armen Sarkissian, visited Roosevelt Island and laid a wreath at the former’s monument to show his respect and gratitude.

This article originally appeared in the Armenian Mirror-Spectator and is reprinted with the expressed written consent of the author.

Posted on August 17, 2018, in General Update. Bookmark the permalink. Leave a comment.