BOCA RATON, FL – Florida Armenians is pleased to announce our endorsements in the upcoming Boca Raton municipal elections. The City of Boca Raton 2017 Municipal Election will be held on Tuesday, March 14, 2017. Polls will be open 7:00 am to 7:00 pm. Electors of the City will vote for candidates for Mayor, City Council Seat A, and City Council Seat B. 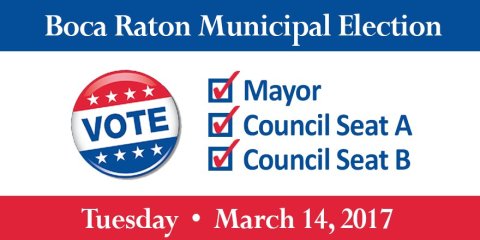 Here are the candidates running:

(Not sure if you are a registered voter? Visit www.pbcelections.org to check your status and find your polling station. To view a sample ballot for the City of Boca Raton, click here.)

In addition, both Haynie and Singer have served the city well in their first term in office and deserve re-election. Haynie has helped guide the city, manage sustainable growth, and boosted a pro-jobs environment. Singer has been a strong advocate for citizen activism and participation in government, as evidenced by his many in-person and telephone town-halls.

In the open race to succeed term-limited Councilman Mike Mullaugh, Emily Gentile is the clear choice. She has the strongest record of city involvement and activism – having served in leadership positions on over a dozen city boards, civic groups, and local charities – unlike her opponent Andrea O’Rourke who has limited community involvement, and Andy Thomson who moved to Boca Raton 7 months ago and hasn’t served on a single city board. O’Rourke and Thomson represent two extremes of the anti-growth and anti-development vs pro-growth and pro-development political spectrum, respectively; whereas Gentile takes a balanced approach, mindful of all parties and interests, and will add decades of knowledge and experience in community affairs and problem solving to the city council.

Florida Armenians is proud to endorse these great community leaders and looks forward to working with them in the years to come.