← Joe Zeytoonian to Perform with The Hellenics at Hollywood Greek Festival
Basimet: An Armenian Treat →

Earlier this month, the annual College Bowl Championship Series (BCS) title game was held at Miami’s Sun Life Stadium and featured top seated Notre Dame versus Alabama. The Crimson Tide rolled over the Fighting Irish 42-14, handing them their first and only loss of the season, while celebrating their third national title in four years. While reflecting on the game and Notre Dame’s historic season, I was inspired to revisit the life of former Notre Dame University head football coach Ara Raoul Parseghian.

Prior to joining Notre Dame, Parseghian was the head coach to Miami, Ohio where he once played from 1946-1947 as Running Back and Defensive Back. He also played for the professional football team the Cleveland Browns from 1948-1949.

In 1950 he first began as an assistant coach and later, head coach for the Miami of Ohio college football team. From 1951-1955 he served as head coach at Miami and began and ended a career for which few are as accomplished and consistent.

To put into perspective what Coach Ara did, a 170-58-6 overall record, or equal to an .836 winning percentage, one must have both feet on the ground with a good dose of confidence and many other skills which are to many to name. A football coach is part teacher, part father, must be modest, a great communicator and has excellent leadership skills.

From 1956-1963, Coach Ara served as head coach for the Northwestern University football team. Some say that Coach Ara had the most impact at Notre Dame University where he coached the Fighting Irish. While at Notre Dame, from 1964-1974, Parseghian was responsible for winning two national championships, in 1966 and 1973 respectively. 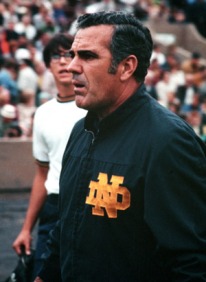 He was named “Coach of the Year” twice in 1964, once in 1966 and in 1980 – named for the Amos Alonzo Stagg Award. In 1980 he was also named to the College Football Hall of Fame. Coach Ara wouldn’t shy away from naming his great predecessors.

While at Miami University, his coach was the great Woody Hayes, and an interesting fact to point to was that while coaching at Northwestern, Parseghian defeated the Fighting Irish on four separate occasions.

Upon being hired in 1963 as the 22nd head football coach at Notre Dame, he inherited a team with a 2-7 record, and with young men who were down on their luck as a unit. No sooner did you turnaround; the next year Parseghian brought Notre Dame a National Championship.

In 1964, a player from Parseghian’s second year tenure named John Huarte won the Heisman Trophy. The Heisman is the most significant and important accolade a college football player can receive in his career. The tandem of Huarte and Jack Snow were prolific as passer and receiver for Coach Ara.

After coaching, Parseghian went into the world of business. A family man, Parseghian has three children, wife Kathleen, and works for two foundations. He founded a charity, which serves to eradicate Niemann-Pick disease and also works for the foundation to cure Multiple Sclerosis.

A couple of months back, Parseghian joined former Notre Dame Coaches Lou Holtz and Brian Kelly on the set of ESPN College game day. At 89 years of age, Parseghian is a testament to health and wellness and will always be revered as an iconic Armenian-American sports figure.

← Joe Zeytoonian to Perform with The Hellenics at Hollywood Greek Festival
Basimet: An Armenian Treat →